John A. Lomax tells how he found the song in 1904, when he made his first field trip for Harvard University: "I found Dink scrubbing her man's clothes in the shade of their tent across the Brazos river from the A. & M. College in Texas. Professor James C. Nagle of the College faculty was the supervising engineer of a levee-building company and he had invited me to come along and bring my Edison recording machine. The Negroes were trained levee workers from the Mississippi River.

'Dink knows all the songs,' said her companion. But I did not find her helpful until I walked a mile to a farm commissary and bought her a pint of gin. As she drank the gin, the sounds from her scrubbing board increased in intensity and in volume. She worked as she talked: 'That little boy there ain't got no daddy an' he ain't got no name. I comes from Mississippi and we never saw these levee niggers, till us got here. I brung along my little boy. My man drives a four-wheel scraper down there where you see the dust risin'. I keeps his tent, cooks his vittles and washes his clothes. Some day Ize goin' to wrap up his wet breeches and shirts, roll 'em up in a knot, put 'em in the middle of the bed, and tuck down the covers right nice. Then I'm going on up the river where I belong.' She sipped her gin and sang and drank until the bottle was empty.

The original Edison record of 'Dink's Song' was broken long ago, but not until all the Lomax family had learned the tune. The one-line refrain, as Dink sang it in her soft lovely voice, gave the effect of a sobbing woman, deserted by her man. Dink's tune is really lost; what is left is only a shadow of the tender, tragic beauty of what she sang in the sordid, bleak surroundings of a Brazos Bottom levee camp.

Lomax continues to say: "The lyrics and music of Dink's Song' are to me uniquely beautiful. Professor Kittredge praised them without stint. Carl Sandburg compares them to the best fragments of Sappho. As you might expect, Carl prefers Dink to Sappho.

"When I went to find her in Yazoo, Mississippi, some years later, her women friends, pointing to a nearby graveyard, told me, Dink's done planted up there.' I could find no trace of her little son who 'didn't have no name.' 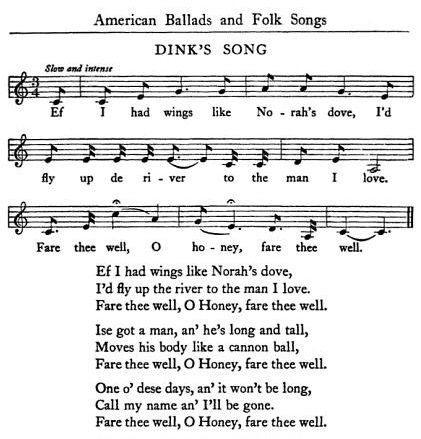 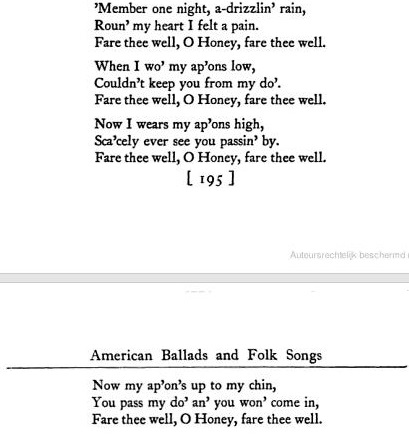 The first artist that recorded "Dink's Song" (as "Fare Thee Well") was Libby Holman with guitar accompaniment by Josh White. Strangely she begins with the last chorus (see lyrics above) 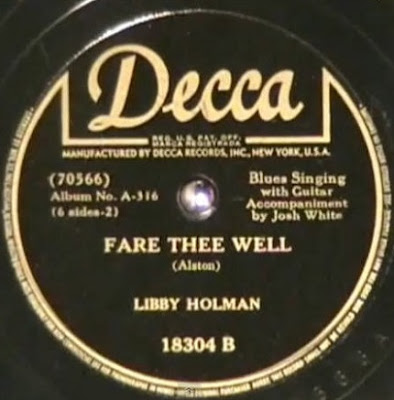 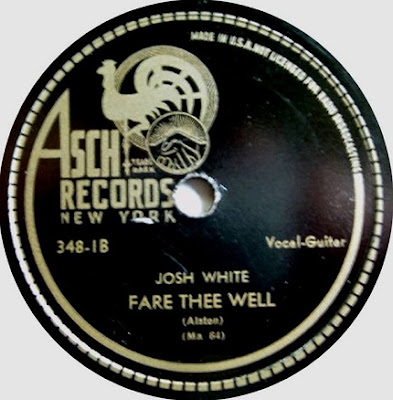 But here are some covers of the version originally recorded by Libby Holman and Josh White.

To You with Love: American Folk Songs for Women | Smithsonian Folkways Recordings

Listen to a sample here

No Direction Home: The Soundtrack (A Martin Scorsese Picture) | Discogs

Both versions above are from the soundtrack of the Coen Brother's movie "Inside Llewyn Davis".