Originally written by Jack Diéval with French lyrics by Michel Rivgauche the song was introduced as 'J'ai le mal de toi'. It was written for the singer Frédérica in 1960, who took part that year in the national elimination rounds of France for the Eurovision Song Contest. This song was not selected, and it seems that it has not been recorded.

Then in 1965, the song was performed on Belgium's BRT radio station by vocalist Lily Castel, singing it in the "Musik Ohne Grenzen" competition; Castel was backed by Fernand Terby's orchestra with Jacques Dieval providing piano accompaniment.

In June 1965 the English rendering by Kathy Kirby, entitled "The Way of Love" was issued in the UK as a single on the Decca-label

Lyricist Al Stillman had previously provided the lyrics for Kirby's English language hit version of "Malagueña" entitled "You're the One".
Recorded by Kirby with her regular collaborators: musical director Ivor Raymonde and producer Peter Sullivan, "The Way of Love" failed to reach the UK Top 50 but (released on the Parrott-label) became a regional hit in the United States reaching #88 nationally.


Following the US success of the song in 1966 a new French version, also by lyricist Michel Rivgauche, was recorded by Dalida as "Parlez-Moi De Lui" ("Tell me about him").
This rendition slightly alters the original melody.

Listen to Dalida's cover-version on the next YT

That version was recorded in The Netherlands sometime in 1965/1966.
It was released on the Relax-label (33003) (owned by the Dutch RTV-personality Willem Duys)

Dalida's "Parlez-Moi De Lui"-adaption was covered by Françoise Hardy in 1968.
On the album "Comment Te Dire Adieu" on the Vogue-label (CLD-728)

In 1968, Armando Manzanero recorded "Somos Novios", which was actually a kind of plagiarism of "J'ai Le Mal De Toi".

In 1969 Armando Manzanero also sang "Somos Novios" in the film of the same name.
That version was released on the RCA-label (MKS-1827)

In 1970, his song "Somos Novios" was translated into English by Sid Wayne, composer for Elvis Presley.
The English version, "It's Impossible", was performed by Perry Como and was nominated for a Grammy.
Perry Como's cover-version was recorded May 5, 1970 in RCA Victor's Studio A, New York City and released on Victor 74-0387
(NICE FACT: Ray Barretto is playing the congas)
US Chart Position No. 10
Charted Adult Contemporary No. 1
UK Chart Position No. 4

Listen to Elvis's cover-version on the next YT

And released in February 1972 as the second single from te album ABOVE:

Listen to Cher's cover-version on the next YT:

And in 1971 New Birth, an American funk and R&B band formed in Detroit, Michigan by former Motown songwriters and producers Vernon Bullock and Harvey Fuqua and music industry veteran Tony Churchill, had an R&B # 12 Hit with their cover-version.

Listen to New Birth's cover-version on the next YT:


"Mary Don't You Weep" (alternately titled "O Mary Don't You Weep", "Oh Mary, Don't You Weep, Don't You Mourn", or variations thereof) is a Spiritual that originates from before the American Civil War – thus it is what scholars call a "slave song", "a label that describes their origins among the enslaved," and it contains "coded messages of hope and resistance". It is one of the most important of Negro spirituals.
The song tells the Biblical story of Mary of Bethany and her distraught pleas to Jesus to raise her brother Lazarus from the dead. Other narratives relate to The Exodus and the Passage of the Red Sea, with the chorus proclaiming Pharaoh's army got drown-ded!, and to God's rainbow covenant to Noah after the Great Flood.
With liberation thus one of its themes, the song again becomes popular during the Civil Rights Movement.

Click here to READ ALL ABOUT "Mary Don't You Weep"


The ORIGINAL is also contained on the next CD: 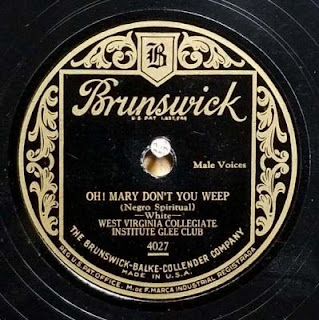 (c) Georgia Yellow Hammers (1927)  (as "Mary Don't You Weep")
Recorded August 9, 1927 in Charlotte, North Carolina under the supervision of Ralph Peer.
Bud Landress was one of the Yellow Hammers.
Released on the Victor-label (Victor 20928)

Contained on the next album:

Filmed March 21, 1929 here BELOW is a rare and historical footage of some anonymous workers (named Georgia Field Hands on a Document CD) grouped around an Augusta, GA. stump take, backed by a lone banjo

In October 1948 he recorded "Mary Don't You Weep" in New York, with Martha Promise doing harmony-vocals.
Released a few years later on the Folkways-set "Leadbelly's Last Sessions Volume One".

It was released on the next album:

(c) Pete Seeger (1957) (as "Mary Don't You Weep")
Released in 1957 on the first volume of the American Favorite Ballads- series on Folkways FA 2320. It was this version that inspired the 2006 Bruce Springsteen cover-version.

During the UK Skiffle-boom period 2 Skiffle-groups recorded a version of the spiritual:

(c) Swan Silvertones (1958) (as "Oh Mary Don't You Weep")
Recorded August 1958
At the end of the year it became one of the Swan's most succesful and influential songs.
A line in this version: "I'll be a bridge over deep water", was the inspiration for Paul Simon to write his "Bridge over Troubled Water".
Simon also borrowed the Swans' "Mary" chord progressions for his "Loves Me Like a Rock" hit with the Dixie Hummingbirds. (SEE LATER ON IN THIS POST)
In 2015 The Swan Silvertones's version of the song was inducted into the Library of Congress's National Recording Registry for the song's "cultural, artistic and/or historical significance to American society and the nation’s audio legacy".
Released on Vee Jay 867

Just as the Caravans and The Swan Silvertones, The Harmonizing Four were a black gospel group recording a version of this spiritual.

The Kingston Trio had recorded the song earlier on October 4, 1960 in the same studio with the same personnel, but that version was not released until the Bear Family Box: Kingston Trio: The Capitol Years.

3 years before, in 1959, Stonewall Jackson had a big C&W hit with Mel Tillis and Marijohn Wilkin's arrangement of "Mary, Don't You Weep" (SEE EARLIER ON IN THIS POST)
This was recorded in the same studio and with the same producer.

(c) Bobby Darin - Mary Don't You Weep
Released November 1963 on album: "Golden Folk Hits" (Capitol ST-2007). "Golden Folk Hits" was Darin's second album of folk songs, produced by Nik Venet. Playing in the sessions were Glen Campbell, James Burton, Phil Ochs and Roger McGuinn (who would record his own version in 2005 in the context of his Folk Den project.

With liberation as one of its themes, the song again become popular during the 1950s and 1960s American Civil Rights Movement.
Additionally, a song that explicitly chronicles the victories of the Civil Rights Movement, "If You Miss Me from the Back of the Bus", written by Charles Neblett of The Freedom Singers, was sung to this tune and became one of the most well-known songs of that movement.

SEE: If You Missed Me on the Back of the Bus Lyrics.pdf

(c) Freedom Singers (1963) (as "If You Miss Me from the Back of the Bus")
Recorded in Selma, AL, October 1963 by the Freedom Singers led by Betty Mae Fikes.
Released on the next album:

In 1964, Jamaican artist Justin Hinds had a ska hit with "Jump Out Of The Frying Pan", whose lyrics borrowed heavily from the spiritual.


And the Godfather of Ska, Laurel Aitken, also covered this spiritual, in 1964.

In 1972 Aretha Franklin recorded a version, that closely followed the Caravans' version earlier in this post.

Paul Simon was impressed by the version of the Swan Silvertones. The Swan Silvertones gospel standard "Mary Don't You Weep" became famous beyond their expectations when Blood, Sweat, and Tears member Al Kooper, a fan of the Swans, introduced their music to a young Paul Simon. An inspiration for his hit "Bridge Over Troubled Water" supposedly came from a line in "Mary" : "I'll be a bridge over deep water". Simon also borrowed the Swans' "Mary" chord progressions for his "Loves Me Like a Rock" hit with the DIXIE HUMMINGBIRDS.

(c) Pete Seeger & Arlo Guthrie  (1974) (as "Oh, Mary Don't You Weep")
On May, 9 1974, the late singer and songwriter Phil Ochs organized a concert to benefit the Friends of Chile, after the murder on their president Salvador Allende and singer Victor Jara.
Pete Seeger and Arlo Guthrie's cover-version of "Oh, Mary Don't You Weep" is on the next album:

Listen to the complete concert here:

An a cappella version by Take 6, simply called "Mary", received wide airplay after appearing on the group's eponymous debut album in 1988.

The song is also sung briefly at the beginning of the music video for Bone Thugs N Harmony's 1996 "Tha Crossroads".

Released on the next album


And here is a video of Bruce recording the song for the Seeger Sessions.

In 1965 Gram Parsons, as a member of the Shilos, recorded "Mary Don't You Weep", which is a different song, composed by Dennis Hupp.