"Das Glühwürmchen", with music by Paul Lincke and German lyrics by Heinz Bolten-Backers, was introduced on March 31,1902 in the Apollo Theater in Berlin, in the operetta Lysistrata.
Rhythmically, the song is in the form of a gavotte.

In the operetta, it is performed as a trio with three female solo voices (Caecilie Carola, Emma Malkowska and Kathi Herold playing the roles of Lysistrata, Chrysis and Bacchys) singing alternately and the women's chorus joining in the refrain.

The song, with its familiar chorus, was translated into English and became an American popular song. It was originally translated into English by Lilla Cayley Robinson, in the early 20th century, and was used in the 1907 Broadway musical The Girl Behind The Counter.
American lyricist Johnny Mercer later expanded and greatly revised Robinson's lyrics, for his 1949 recording. The 1952 Mills Brothers cover became a million-seller, and subsequently has been performed by several others.

Also released on United A232


After the song was translated into English by Lilla Cayley Robinson and introduced by May Naudain in 1907 in the Broadway Musical: The Girl Behind the Counter, 2 versions   topped the US Charts.

Or to a sample here:

1908: "Take Me Out with the Crowd" ⋆ Archeophone Records


In 1910 Ballard Macdonald and Harry Carroll wrote "Nix On The Glow Worm, Lena", sort of a parody and using elements of Paul Lincke's "Glow Worm".
It was introduced in the Broadway Musical "Ziegfeld Follies of 1910"

In 1913 the great ballerina Anna Pavlova performed an orchestrated version of "The Glow-Worm". 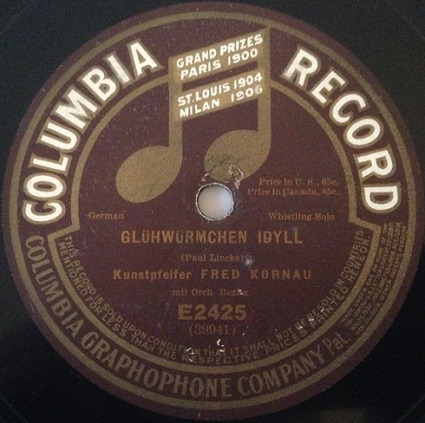 In 1929 Paul Lincke conducted an orchestra playing his own composition.

And in 1948 Bing Crosby sang a version of "Glow Worm" in one of his radio shows, that already laid the foundation for the future Johnny Mercer / Mills Brothers versions.

In 1949 Johnny Mercer revised the Lilla Cayley Robinson lyrics most inventively and recorded his version for the Capitol-label. 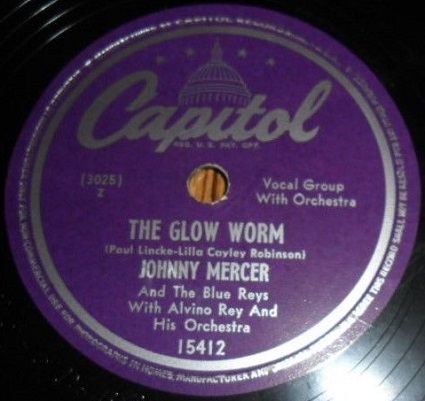 In 1952 the Mills Brothers exactly copied the Johnny Mercer-cover and made a Millionseller out of their version. also reaching the Topspot of the US charts.

In 1964 Allan Sherman parodied the song as "Grow, Mrs. Goldfarb".

In 1992 Mel Tormé sang his own version of the Christmas version of "Glow Worm".

And even more versions here:

The famous tune of the Popeye the Sailorman cartoon is based on the "Sailor's Hornpipe".
It was originally titled the "College Hornpipe" and became known as the "Sailor's Hornpipe" through its association with the performance of the hornpipe dance, typically performed on the stage in nautical costume.
Most likely originating in England, "Sailor's Hornpipe" was imported to North America where it entered traditional repertoire and became fairly widely known, still with its nautical connotations--so strong was the association, in fact, that it was selected as the theme song of a popular mid-20th century animated cartoon character, Popeye the Sailorman.

One of the earliest printings of the tune appears on page 13 in a volume entitled "Compleat Tutor for the German Flute", published by Jonathan Fentum, London, c. 1766

In America it was published somewhere at the end of the 18th Century in the music manuscript copybook of Henry Livingston, Jr. (as "Colledge Hornpipe", set for the German flute).

John Philip Sousa's "Jack Tar March", written in 1903, features "The Sailor's Hornpipe" tune in one of its segments.


Somewhere between 1903 and 1905 a Columbia Band recorded a version, that was released on a Standard Disc Record # 1587

Listen here: (the "Popeye" part starts at 1 min and 15 sec on the soundfile of the next link)


The tune is also one of the movements ("Jack's The Lad") in Sir Henry Wood's "Fantasia on British Sea Songs", a medley of British sea songs arranged by Sir Henry Wood in 1905 to mark the centenary of the Battle of Trafalgar. For many years it was seen as an indispensable item at the BBC's Last Night of the Proms concert.

In 1921 Francis Quinn recorded a similarly titled "Sailor's Hornpipe", which has another tune

In 1928 the song Barnacle Bill the Sailor also contained a fragment of the "Sailor's Hornpipe".


In the first Fleischer Popeye cartoon, Popeye the Sailor (1933), "The Sailor's Hornpipe" tune was used in the cartoon's theme. And "Barnacle Bill" was used as the recurring theme for the Bluto character.

A later Fleischer Popeye cartoon, "Beware of Barnacle Bill" (1935), is a mock operetta based around a toned-down version of the song "Barnacle Bill The Sailor".


From then on the "Sailor's Hornpipe" tune was played in all of the Popeye cartoons, usually as the first part of the opening credits theme, which then segued into an instrumental of "I'm Popeye the Sailor Man".

In 1933 Groucho Marx does the traditional dance to this number at one point, as part of the opening number in the film, Duck Soup.

"Happy Birthday to You" is one of the most sung songs in the world.
The melody comes from the song "Good Morning to All", which has traditionally been attributed to American sisters Patty and Mildred J. Hill in 1893, although the claim that the sisters composed the tune is disputed (SEE NOTES AT THE BOTTOM OF THIS PAGE)

Mildred, who taught and played organ, wrote the music. Her sister Patty, who was head of the Louisville Experimental Kindergarten School in Kentucky, wrote the lyrics to this children's song to be sung in class, first thing in the morning.
In 1896 the song was published by Clayton F. Summy, Co in Chicago, on page 3 of the book "Song Stories For The Kindergarten".


It is likely that teachers and students spontaneously adapted the published version of "Good Morning to All" to celebrate birthdays in the classroom, changing the lyrics to "Happy Birthday" in the process.
The complete text of "Happy Birthday to You" first appeared in print as the final four lines of Edith Goodyear Alger's poem "Roy's Birthday", published in her book "A Primer of Work and Play", copyrighted by D. C. Heath in 1901, with no reference to the words being sung.

From then on "Happy Birthday" with the "Good Morning Melody" became increasingly popular and was sung on almost everybody's birthday and was also used in cartoons, movies and musicals, without crediting the Hill sisters.

Jessica Hill (sister of Patty and Mildred) no longer endured the uncrediting use of the Hill-melody and sued all these Happy Birthday profits successfully, by demonstrating the undeniable similarities between "Good Morning to All" and "Happy Birthday to You" in court, Jessica was able to secure the copyright of "Happy Birthday to You" for her sisters in 1934. The Chicago-based music publisher Clayton F. Summy Company, working with Jessica Hill, published and copyrighted "Happy Birthday" in 1935.
A few years later, Summy’s company was bought out by a New York accountant, John Sengstack, who renamed it Birch Tree Ltd. They held on to the publishing for “Happy Birthday” until 1988, when Warner-Chappell, the largest music publisher in the world, purchased Birch Tree for $25 million. Today the song brings in about $2 million in royalties annually, with proceeds split between Warner-Chappell and the Hill Foundation.
(Both sisters died unmarried and childless, so the money has presumably been going to charity or to nephew Archibald Hill, ever since Patty Hill passed away in 1946.)


But American law professor Robert Brauneis, who extensively researched the song, concluded in 2010 that "It is almost certainly no longer under copyright".

"Copyright and the World’s Most Popular Song" by Robert Brauneis


In 2013, based in large part on Brauneis's research, Jennifer_Nelson's "Good Morning to You Productions", a company producing a documentary about "Good Morning to All", sued Warner/Chappell (who had boughts all the rights to the song in 1988) for falsely claiming copyright to the song.


On July 28, 2015, one day prior to a scheduled ruling, Nelson's attorneys Betsy Manifold and Mark Rifkin presented new evidence which they argued was conclusive proof that the song was in the public domain.
In 1927 a book "The Everyday Song Book" was published which contained both "Good Morning To All"  and Happy Birthday".
A line of text below the title said: "Special permission through courtesy of The Clayton F Summy Co".


As this was the 12th edition the lawyers tried to find earlier editions, and in the archives of The University of Pittsburgh, they came upon the fourth edition, published in 1922, which included the famous Happy Birthday song without any copyright notice. This book, plaintiffs believe, establishes that "Happy Birthday" lyrics were dedicated to the public years before the copyright registration that Warner/Chappell is relying upon was made.


In September 2015, a federal judge declared that the Warner/Chappell copyright claim was invalid, ruling that the copyright registration applied only to a specific piano arrangement of the song, and not to its lyrics and melody. So "Happy Birthday" is in the public domain.
Here's the original filing from RECAP:

The origin of the lyrics for “Happy Birthday” coupled with the tune goes back even further than 1922. The earliest publication of the words (coupled with the tune) were printed in a 1911 song book called "The Elementary Worker and His Work".
No author was credited, though the book mentioned that the song was to be sung to the tune of “Good Morning.”


Before "Happy Birthday" was copyrighted it was used freely, as in this 1931 Mickey Mouse cartoon


"Happy Birthday To You" was also sung in Bosko's Party, a Warner Bros. cartoon of 1932, where a chorus of animals sings it twice through.

On Februay 27, 1936 Bing had already sung the song on his Kraft Music Hall radio show (along with Lotte Lehmann and Ann Sothern)

"Happy Birthday, Mr. President" as sung by actress and singer Marilyn Monroe on May 19, 1962, for President John F. Kennedy at a celebration of his 45th birthday, 10 days before the actual date (May 29)

On September 7, 1963 The Beatles recorded "Happy Birthday Dear Saturday Club" at London's Playhouse Theatre.
It was aired on October 5, 1963 to celebrate the 5th anniversary of BBC's "Saturday Club" programme.

In 1968 The Idle Race plays a portion of "Happy Birthday" on the "Birthday Party" album.

In 1969, the song had its longest-distance broadcast when the crew of the orbiting Apollo 9 sang Happy Birthday to NASA director Christopher Kraft.
The message and song starts at 17 min and 30 sec in the next MP3

Based on the well-known "Happy Birthday" tune, this short piece was originally part of a group of variations by famous composers commissioned for the Philadelphia Orchestra's seventieth anniversary. The occasion included President Nixon's presentation of the Medal of Freedom to Eugene Ormandy. It has since been performed for other occasions, among them several Copland birthday celebrations.

On August 21, 1969 Elvis Presley sang "Happy Birtday To You" in concert in Las Vegas for James Burton.


NOTES: The lyrics of two songs are certainly similar to "Good Morning to All" / "Happy Birthday To You", in that they involve heavy repetition of a simple greeting.
The first song "Happy Greeting to All" was published in 1859 by Horace Waters in "The Sabbath School Bell"